[March 2017] Dielectric Communications, Inc. is spending 2017 to celebrate 75 years as a supplier of broadcast transmission gear.

It was 1942 when Dr. Charles “Doc” Brown’s Dielectric Products Corporation started developing transmission lines for early wartime radar systems. A number of the early employees came over from RCA, which had curtailed its antenna work about that time.

Circular antennas for FM were among the first broadcast products, along with isocouplers that permitted mounting FM antennas on AM towers. In recent years Dielectric has become known especially for their high-power antenna systems and filters.

After the war, Doc Brown’s team focused their efforts on the newly approved television Industry, becoming a major supplier to the three television broadcast networks.

In 1954, Doc Brown moved the company to his hometown in Raymond, Maine, where it has been headquartered ever since. 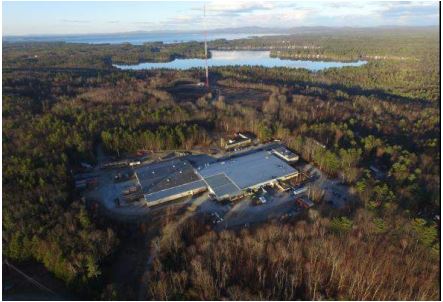 In 1986, Dielectric closed the loop by acquiring RCA’s antenna division, with Dr. Oded Bendov as the head of the division. Bendov was instrumental in inventing the circular antenna for TV., which netted Dielectric an Emmy Technical Achievement Award in 1984.

During this time, Dielectric was the first company to build stacked antenna systems.

When the FCC mandated the move to digital television, this opened up a huge market for Dielectric, selling some 1,300 digital antennas from 1994 to 2009. Dielectric was also heavily involved in radio, as shown by their engineering of the HDFMVee master antenna, which paved the way to HD radio broadcasting.

Along the way, in 2000, Dielectric started to acquire several companies in an effort to expand their offerings, but ended up selling them off to concentrate on the products and services that had built their reputation.

However, deciding on a change in direction for their business, in early 2013 SPX announced the closing of the company’s antenna division.

Shutdown never really happened, as it took only a few months (June) for the Sinclair Broadcast Group, operator of television stations, to purchase Dielectric’s manufacturing facility. That kept it open for business in anticipation of the need for new digital antennas because of the FCC’s Spectrum Auction’s repacking scheme.

Dielectric continues to specialize on all the components needed to get from transmitter output to tower top.

By doing everything in house – designing, constructing, and testing the parts – the company can deliver antennas to meet and exceed specifications. The company’s product line is complemented by an extensive patent portfolio and archives of tutorials and white papers, plus data on antennas reaching back to the 1960s.

Dielectric claims to hold more patents than any other antenna manufacturer in the world – some from as far back as 1942 and others, so new, they are still in the “active” file.

Today, from its 100,000 square foot facility in Raymond, Maine, Dielectric continues designing and manufacturing high-quality solutions for every broadcaster’s needs, from remote stations to major markets.