[June 2011] The storms that thrashed the middle of the US in May and June brought floods, tornados and more problems. As stations all over the region struggled to recover – and in many cases get back on the air – the actions of a Clear Channel Emergency Response Team shows how to do it. Our thanks to Erik Kuhlmann, Regional Engineering Manager in Portland, OR for the information and pictures.

The Clear Channel Emergency Response Team (ERT) hit the ground running, and had the market covered with RF within 24 hours, and the larger coverage area the following day. Having had a disaster recovery plan in place certainly helped. 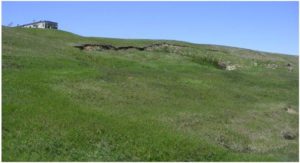 The cause of the trouble to KCAD and KZRX. Not only did a significant drop occur, but if you notice, a large area was affected.

As can be seen, a large patch of land just slid down the hillside. This caused a guy anchor to give way, with the tension from the remaining guys pulling the top half of the tower too far off plumb and resulting in a total collapse of the tower. 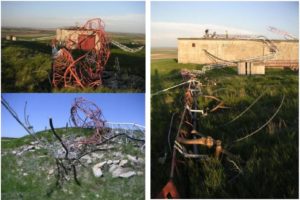 The tower suffered catastrophic failure from a guy anchor failing.
Both KCAD and KZRX were knocked off the air.

The local engineer, Ernie Swanson, called Erik Kuhlmann and arrangements were made to get equipment and more people on-site as rapidly as possible.

While waiting for the other replacement antennas and parts, Steve George got started and with the other engineers, put an old antenna to use, mounting it on the top of the transmitter building. It was not the prettiest antenna in town, but KZRX was back on the air with a couple of hundred Watts from the auxiliary transmitter by 8PM the following evening! 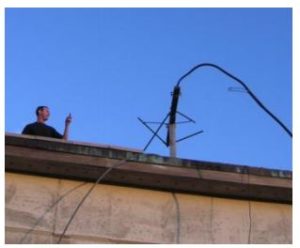 Truly an “Emergency Antenna” … but it got KZRX back on the air in less than 24 hours from the disaster.

Next it was time to get KCAD back on the air. Another old antenna bay was located, along with a spare STL dish at the studio and with some retuning of the KZRX main transmitter (which had been dragged across the floor by the heliax when the tower fell) to KCAD’s frequency – and voila! – another station with a weak but usable signal to reach the local audience was up and on the air by Midnight. 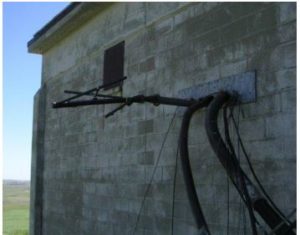 Again, not pretty – but it worked!

By the third day, Allan Brace arrived from Tulsa with the ERT Truck, including a portable tower and parts. With more repairs, the crew had one station on the portable tower – and audible for 50 miles – by the next day. The following day, a short piece of the original tower was cut from the damage, set up, and the second station was moved to the temporary tower. 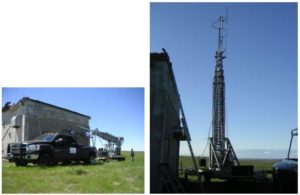 The next step, of course, was to survey the land and see about setting up a new tower. The tower and antenna is already on order and by mid-July, the stations should be back to full power!

Quite a good recovery from a nasty mess by an excellent engineering team!