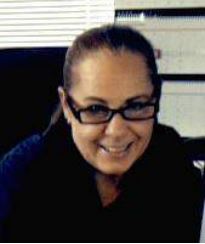 [November 2014] It seems rather contradictory: broadcasters install expensive, state-of-the-art equipment, then attach it to a tower reaching hundreds of feet in the air – virtually inviting lightning hits. How can broadcasters protect their plant? Lightning Eliminators & Consultants’ JoOnna Silberman explains.

Understanding how lightning works, the threat that it represents, and the steps you should be implementing will help you preserve assets, promote safety and protection for employees, and maintain sustainability for your company.

A single lightning strike to a mission-critical facility poses unacceptable risks which can cripple operations. These risks can include, but are not limited to, explosion/fire, loss of product, damage to infrastructure, no communications, failure of sensitive electronics and equipment, lengthily downtime and more importantly, loss of life. And, I have not even mentioned liability and environmental penalties.

With that in mind, let us spend a few minutes on a review of the basics of lightning, including a few papers and links which will assist you in gaining a better understanding of the issue and what protections you can put into place:

Yes, lightning is caused by the build-up of static electricity within a thundercloud.

When the downward leader connects with an upward streamer, then the visible lightning strike is formed and massive current flows between the cloud and earth. 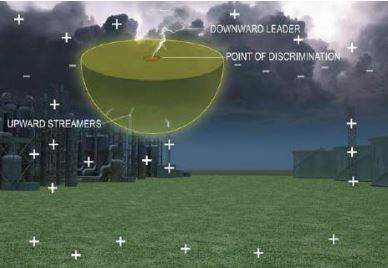 A more extensive overview of lightning is offered in “Preventing Direct Lightning Strikes” by R. Carpenter, P. Carpenter, & D. Sletten (March 2014) or by viewing our video “The Lightning Discharge Principle” on YouTube. The video is a comprehensive educational presentation that gives you an in-depth under-standing of lightning and how it affects a structure.

The chance that your facility or structure will be hit varies on a number of factors such as location, structure height, and design, temperature, and humidity.

If all the factors are just right, even areas with infrequent thunderstorms can experience rare, but high intensity, lightning strikes. One should note that recently it has been reported that lightning is becoming more volatile, striking more frequently both in places that are known for heavy lightning storms but also in regions that have not had many lightning events.

Here is something I wrote last year which is still extremely relevant, if not more so now than before, which covers lightning’s future, “To Strike or Not to Strike, that is the Question: Is there more lightning or am I imagining it?”

It is pretty clear that lightning can have devastating effects on any operation, whether taking a direct strike or being subjected to the secondary effects from nearby strikes.

There are hundreds of thousands of broadcast, cell, and microwave towers erected around the world, and the number is growing by leaps and bounds each year. 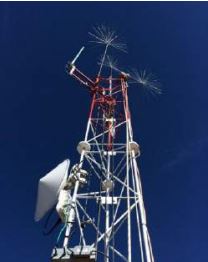 From their start early in the last century, towers have come a long way. Microwave and cell towers are now the lifeline for businesses, governments and people all over the world. They are used by almost every major industry today and the vast majority of people rely on wireless and satellite communications for everything from cell phones, to the Internet, radio, television, data, and more.

These towers have an impact on all of us, every day, in almost everything we do.

In our fast paced environment, reliability has become imperative. When transmission service is interrupted the effects are far reaching and the impact can be costly, inconvenient and sometimes devastating to many.

Recently, cell service where I live was interrupted for five days. Apparently over 500,000 people were impacted by the same outage, caused by an incident in Denver, some 30 miles away. In the end, I received a $10 credit on my bill.

If the provider had to issue the same credits to just half those affected – which is likely – I believe the cost to my cell company was probably around $2.5 Million. (This is a very basic calculation. However, I live in Boulder, Colorado. Can you imagine if the same thing happened in New York City, Chicago, San Francisco or Washington D.C.?)

With so much of our communications – especially for broadcasters – relying on our tower sites, the impact of an outage affecting Radio and Television transmissions, as well as those in the military, government, and financial sectors can be substantial and devastating – in some cases costing lives during emergency situations.

There are many reasons why transmission services can go down, but why would one allow lightning be the cause when there are easy ways to protect a site?

Indeed, such protection against a direct strike and secondary effects of lightning is imperative and necessary.

It is generally thought that taller structures are more susceptible to lightning, so as you can imagine, towers are a prime target due to their height for streamers to form, leaders to attract, and – boom! – you have a strike which can burn or melt an antenna or feedline, or damage the tower itself.

What is less known is that, due to their design and the nature of the equipment on them, there are many points along the height of the structure where a streamer can form, especially where sensitive technology such as dishes and antennas are located. Once the streamer is formed it is a prime target for any leader, which is what makes towers extremely vulnerable.

A proper survey of your antenna site and surroundings will help identify potential vulnerabilities so they can be corrected before a storm hits. 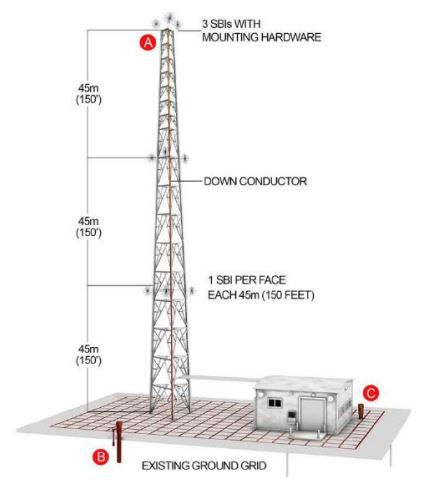 As much as to the tower itself, lightning poses unacceptable risks for electronics and operating systems.

Too many companies consider a direct lightning strike as their only risk and fail to consider the secondary effects of lightning. The truth is that a lightning strike can cause substantial damage even when it strikes the ground surrounding a facility. It is often overlooked until it is too late.

A lightning strike causes an electromagnetic pulse (EMP), which is then coupled to overhead and underground wires and cables, and, in turn causes a powerful surge into your equipment and electronics. The effect can radically reduce what is called meantime-between-failure to zero, resulting in major damage, critical data loss, downed operations, and lost airtime.

Proper grounding is the foundation for effective lighting protection. This is because much of the damage created by a lightning strike is not immediately seen or noticed.

Unfortunately, most companies do not consider lightning when designing their grounding and/or surge protection. Such considerations must be incorporated when engineering these systems. Basic grounding is discussed in the video I mentioned: “The Lightning Discharge Principle.” Two additional videos can help provide a well-rounded understanding of the necessary concepts:

Along with good grounding, the use of torroids on coax and cables can reduce the possibility of a lightning strike getting into the transmission system.

When it comes to lightning protection, a common misconception is that the different types of solutions available are variations on the same technology. This is not necessarily the case; though the process may rely on the same natural phenomena, the result is entirely different.

Perhaps the most basic protection often seen is a installing a lightning rod attached to the ground. Yet some might respond to lightning rods by asking: “Why would you invite the devil into your playground?”

On the other hand, advancements in technology over the past few decades have provided more options. Still, I will tip my hat to Ben Franklin: “You’ve had a great run!”

Two major types of new technology in use include the Early Streamer Emitter (ESE) and the Charge Transfer System (CTS). Although both of these products are used for lightning protection, contrary to the public’s understanding, they are very different, their actions diverge.

An ESE is a similar technology to the lightning rod. DAS is an entirely different type of technology, taking a completely opposite approach to lightning protection: prevention vs. attraction. (A type of CTS, the Dissipation Array® System (DAS®), works to prevent a lightning strike in a specific area designated for protection.)

The only similarity is that all three initially operate off of the same scientific principal or phenomenon, known as “Point Discharge.”

A simpler way to put the differences: the lightning rod and ESE act toward generating streamers from a single point whereas the CTS utilizes a slow discharge process through thousands of points. Understanding the differences between these technologies is important.

For example, it might not be ideal to attract lightning in areas that are highly volatile or indispensable, but instead to prevent the lightning from striking in an area most important to protect. So the idea is that while lightning rods and ESE attract lightning, CTS prevents it from terminating in the area of protection. For a more technical understanding of CTS and DAS, you are welcome to review some of this information:

I believe the most important piece of information that I can share with readers is this: Lightning does not discriminate and it only takes one strike, which can in some cases, destroy an entire company – or seriously harm someone.

So please take into account the following points when you consider lightning:

Lightning Eliminators & Consultants has created a CTS package specifically designed to protect towers – it is simply called the Tower Kit. Comprised of lightning protection, grounding and surge protection, it is a cost-efficient and easy-to-implement system which will provide towers and the associated equipment the protection that they need. To learn more, please visit the LEC web site by clicking here.

JoOnna Silberman, aka The LightningDiva is the Marketing Coordinator for Lightning Eliminators & Consultants, located in Boulder, CO. If you have any questions, contact JoOnna at: LightningDiva@lecglobal.com