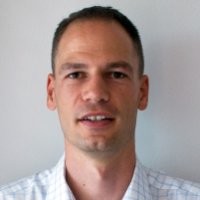 [October 2011] The move to digital consoles has created interest, ease of operation, panic, frustration, and questions – often in equal parts. Goran Tomas takes a look at the Axia iQ.

The Axia iQ is a small form digital console which debuted at the 2010 NAB Convention in Las Vegas. It is a lower cost addition to the Axia’s line-up of networked audio consoles and devices. Like all Axia products, it is based on Livewire audio-over-IP technology.

If you have not heard of Livewire yet, it is a standard developed by Telos and Axia that allows multiple channels of audio to be carried over a standard Cat 5/Cat 6 cables. And not only audio, but Livewire handles the GPIO and control signals as well.

The iQ is targeted towards smaller radio stations and installations, which have fewer needs in terms of the number of sources and how they are handled. This smaller subset of features is reflected in its lower price point. Typically, an equivalent Axia Element configuration (with roughly the same number of I/O and faders on the console) would cost twice as much.

The heart of the Axia consoles is a multicast switch, which by design makes every Axia system a router/matrix system. Livewire uses standardized protocols such as RTP and UDP – however the synchronization mechanism that enables syncing of all streams in the network and provides low latency, is proprietary.

The basic iQ system consists of the Main Frame (eight faders and a monitor module as shown above) and an iQ core. The core is a similar concept to Axia Powerstation, in a sense that it combines a console power supply, DSP mixing 2 and processing engine, a network switch, GPIO ports as well as digital and analog I/O.

The control surface of the console has a clean and easy-to-understand layout; most users will be able to use it immediately, without too many instructions.

The fader channels are 100 mm conductive plastic faders, with a high resolution OLED display, four program buses, an optical, rotary “Option” encoder, preview and soft buttons and two heavyduty ON and OFF switches.

The rotary encoder is used to select which source to assign to a fader, to adjust the gain and equalization, select stereo/mono mode (for stereo sources), and provide pan/balance control.

All this information, as well as the source name and a small pre-fader level meter, is clearly visible on each fader’s OLED screen. OLED screens provide information at a glance.

The monitor module features volume controls for the control room and studio speakers as well as headphones, selection of monitoring sources (two external inputs are supported), preview volume control with an option to route that preview audio to headphones.

There are also talk back buttons, a profile recall selection (the iQ can store and recall four console “snapshots”), and buttons to select metering and adjust timer/clock. The metering bridge has horizontal OLED meters for monitoring two, three or four program busses and a timer/clock display.

EQ is available on up to six channels; an outboard voice processor can be added to the system, if desired. 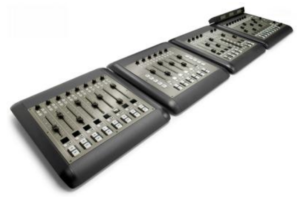 All of these frames can be placed on the table top, recessed in the table, connected together to form a unified console surface or even mounted in a rack.

The heart of the system is the iQ core which is a mixing/processing engine with power supply, multicast-enabled switch and I/O interface – all in a three rack unit enclosure.

This time Axia got the number of inputs and outputs right, as there are more inputs than outputs and a sufficient number of microphone and analog inputs. To be precise, iQ core has:

These should be more than enough for most installations. All of the audio I/O (except microphone inputs) is on RJ45 connectors following the StudioHub+ standard. Additionally there are six 100Base-T ports to connect other Axia/Livewire devices, and 2 Gigabit ports to connect/daisy-chain studios together. Connection can be via copper or fiber.

The iQ core is convection cooled and produces no noise at all. Therefore it can be located in any studio. An optional backup power supply (2RU high) is available, if you want to add power supply redundancy.

The iQ is, as noted, for smaller installations. The inherent I/O limitations are worth considering, to make sure the iQ is the right product for your studio needs.

Fortunately, the iQ has a sufficient number of inputs (especially analog) that a full-size node will rarely be needed. If you do need more network sources than the iQ can provide, that probably means something like the Element console – with virtually unlimited sources – would be more suited for the size of your installation.

As with all Axia and Livewire installations, cabling is reduced to a minimum as one Cat 5 cable will carry many all the digital audio channels and control signals.

Still, setting up a digital console is perhaps the most daunting digital task for folks used to wiring point to point with analog systems is. Fortunately the software GUI makes it simple. 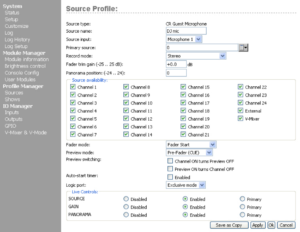 Configuration of the iQ system is as easy as connecting a PC to the network, opening a browser and entering the IP address of the iQ core. Everything is done through the web interface – configuring the console, assigning inputs and outputs, defining source profiles, or saving show profiles (called snapshots). Routing is done by clicking a mouse in the browser window, mix minuses are automatically generated and, with Axia Audio drivers for the PC, there is no need to use sound cards anymore.

For those familiar with the Element setup, while the iQ has only one virtual mixer and one virtual mode circuit, it also has a check box to mix preview with CR monitoring.

To show how easy the physical installation can be, here is a simplified studio layout based on Axia iQ: 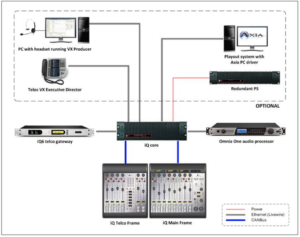 On the left you can see a six-fader telco expansion frame has been added to the Main frame, for the total of 14 faders. The integrated call controller makes it easy for an operator to talk to the callers off and on-air, and also read the status of the six phone lines (POTS or ISDN) that can be connected to the iQ6 telco gateway.

The iQ6 itself has two digital hybrids under the hood, both of which are using the advanced 3rd generation Telos hybrid technology with Digital Dynamic EQ and dynamics processing by Omnia, for consistent audio from call to call. It also features AEC (Advanced Echo Cancellation) from Fraunhofer Labs to reduce feedback and echo, especially with mobile and VoIP calls.

On the other side, there is a PC with play-out software and Axia Audio PC driver, delivering digital audio straight into the Axia network. The same PC can receive streams from the iQ, such as EXT1 for logging purposes or PGM4/Record bus for recording voice tracks and other bits.

Finally, an Omnia One processor running FM, AM or Multicast software feeds the transmission system for broadcast.

For more intense talk situations, an alternative might be to connect a VSet12 to the system, to provide a physical phone and hybrid controller in one device. VSet12 has a large LCD color screen to display phone line status, caller information, fader assignment, access built-in address book or call logs etc. VX Producer software is also available for call screening purposes, but can also act as a phone as well – just connect the headset to the PC running VX Producer and you can not only talk to callers, but record and later edit the conversation with the built-in audio editor and send the finished package to the studio for playback.

Overall, the iQ is a very nice, compact and modern audio-over-IP broadcast console, perfect for smaller radio stations and other installations. It has substantial I/O capability, enough faders even in the basic configuration, and the flexibility and advantages of Axia’s Livewire technology. The list price for a basic Mainframe + iQ core costs $8,390.

Goran Tomas is located in Zagreb. Croatia, where he is working as a consultant and systems integrator. You can contact Goran at: goran.tomas@gmail.com