AM Revitalization: Have an Opinion? Tell it to the FCC!

[November 2013] Under the prodding of Commissioner Ajit Pai, the FCC has issued a Notice Rule Making regarding possible ways to help AM broadcasters revitalize the band. This Guest Editorial by Mark Heller is offered to encourage you to make your thoughts known.

Believe it or not, fifteen years ago, I served on the County Board.

I would go around the district of 3,200 residents and ask them what was on their mind. The guys on the barstools never failed to express strong opinions: “This is wrong,” “that should be added,” “here is an important oversight.”

I wrote down everything they said.

A year later, a U.S. Senator gave me a photocopy of a “voter’s list” – who had voted in the past six years in my district. Funny, but I knew the guys on the barstools, personally. Yet, despite their strong opinions, they never voted. Not once. Not for dog catcher or President.

The FCC issued a Notice of Proposed Rulemaking in the matter of Revitalization of the AM Radio Service on October 31st. It was then published in the Federal Register on November 20th , which started the clock for comments from the public.

So, from now until January 21, 2014, the FCC has opened the window to accept a wide range of topics concerning AM improvement. This is our chance to be heard on this important issue.

It is the very first time, in my 41 years of broadcasting that I have ever seen the FCC ask for specific ideas – and then wrap it all up with a statement that any other initiatives would be welcomed.

I am not going to share any of my thoughts. It would not be fair. But, you know there will be big hitters putting their two-cents in.

So, my question is: will you do the same?

I have been watching a few comment boards, and strong opinions are not in short supply. Some of the ideas are simply great. Others not so much. But, then, I realize that some of my ideas will be considered “off the wall” too!

Your energy and ideas, as expressed on those social boards, can make a difference – if you file your comments now.

The key is to do something constructive with these ideas. In this case, that means telling the FCC itself what you think will help AM the most. I am going to submit something. I have had enough advance warning to think about this. And, quite frankly, you had the same amount of advance notice, too!

So, I want to encourage you to file your comments on “AM Improvement” and tell the FCC what you think. Others have tried, before me and you, and this opportunity may only come once every generation.

How to Let Them Know

The process is simple. You can do it on-line or via US mail. I personally prefer mailing the original and copies, and I know it got there! (But, that is just me!)

To file by mail send an original and one copy addressed to the Commission’s Secretary, Office of the Secretary, Federal Communications Commission, 445 12th Street SW, Washington, D.C. 20554.

Be sure to make sure the Media Bureau Docket Number 13-249 is displayed prominently. (Overnight and hand-delivered mail are also permitted, as per the instructions in the FCC’s Rulemaking.)

That is all it takes.

If you want to do it even more quickly, and not even need paper and envelope, do it on line.

The FCC ECFS (Electronic Comment Filing System) is available for short comments or uploading more lengthy documents. You can also search (13-249) for comments already filed. As of this writing, there are two early comments filed, but you will see more shortly.

If you just want to type out your comments and upload them to the site, click on Submit a Filing and fill out the short form, then upload your comments. 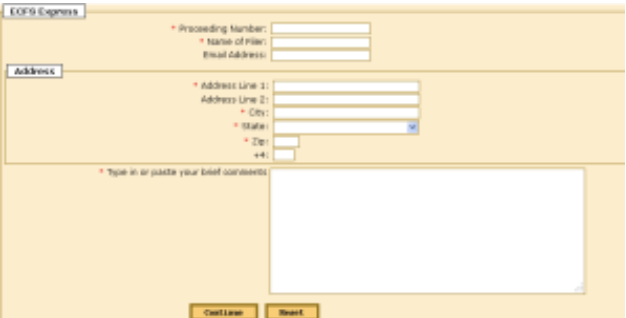 If you want to file just a very short comment, you can even do it without leaving this screen. Just enter your comments on the screen. The site is supposed to make it easy (Submit a Filing (Express), where you can click on a proceeding and go to the simple entry page. However, at this time, they do not list 13-249, but you can click on any proceeding and change it to 13-249 … or use the other form.

Once you have submitted your comments, a confirmation number will be provided. You can use that to ensure your comments are posted.

As time moves along, you may want to see what others are saying. That may lead you to submit another comment (there is no limit), or reply during the Reply Comments period, which starts after January 21st.

Entering 13-249 in the Search for Proceedings, will take you to a screen of what has been filed already. 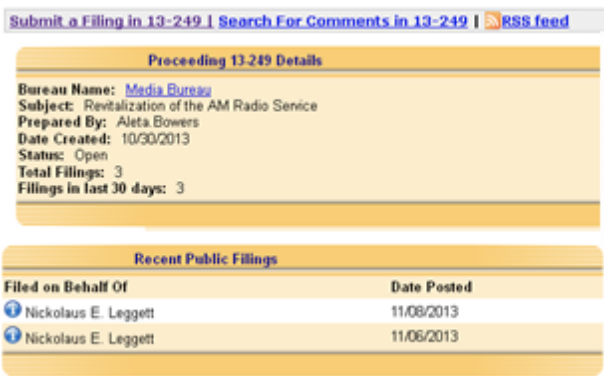 The process is not rocket science; it is not heavy lifting. One thing is for sure: you will not be the only one commenting.

Whether you have a lot to say, or just a simple comment, take a moment and send it to the FCC.

On the other hand, the bottom line is: if you do nothing not, do not complain later if something important to you does not get addressed.

This is no time to turn this matter over to Associations, Lobbyists, and Giant Corporations.

Mark Heller the Chief Engineer at WGBW-AM, WLWB-AM, and WEMP-FM in Denmark, WI. He is also a board member of the SBE. You can contact Mark at: Mheller@sbe.org