AAT Succeeds at the Highest Levels

[September 2018] Every construction project has its own set of needs – and some unusual aspects – necessary to get the job done. Selecting the right equipment for the job takes more care than just looking for the cheapest prices.

Several years ago we had a major build-out of a number of FM translators that were granted by the FCC as a result of the translator filing Window back in 2003.

Our Edna Peak transmitter site is located near Marysvale, Utah, with a height above mean sea level of 12,000 feet. According to the FCC data base, it is believed to be the highest commercial FM broadcast site in the United States. Wind speeds have been measured at over 130 MPH with over a foot of radial ice on the tower.

In this environment, we have a huge 200-foot Interstate self-supporting tower capable of withstanding 150 MPH winds with a full ice load. The tower supports an ERI 8-Bay FM circular polarized antenna at the top, into which we combine 97.7 & 100.5 FM, and a smaller Shively FM at the 100-foot level for two non-commercial lower power stations.

We needed a number of FM combiners, bandpass cavities and FM transmitters to complete the build-out.

We decided to use Amerian Amplifier Technologies (AAT)’s combiners at Edna Peak because of a previous experience we had with AAT and its CEO, Steve Wilde.

I became acquainted with Steve Wilde first about five years ago when I had a problem with a 27.5 kW Continental FM Transmitter. The solid state IPA in the transmitter had failed and an engineer friend of mine suggested that I called Steve for a replacement IPA and the repair of my defective module.

I was very impressed with Steve and his knowledge of not only the Continental line of transmitters, but also several other transmitters that I had in our facilities including several old CCA, RCA, and Harris transmitters.

His visit marked the beginning of a great friendship and business relationship.

Then, a “major brand” combiner burned-up in the middle of the winter because of failing finger stock. The defective combiner was running warm at that elevation where the air is very thin. After about two years, it failed.

Up to that point, I had not purchased any of Steve’s combiners, cavities, or transmitters but I had heard some really good things about his equipment. So I gave Steve a call.

Steve was able to get us a replacement in about two weeks. We hauled it in with a snowcat and quickly got the two non-commercial FM stations back on the air at full power. 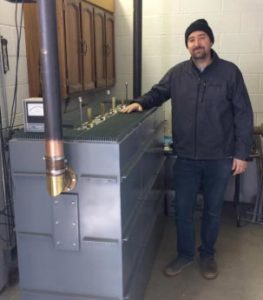 Steve Wilde with one of his combiners

Once on site, all we had to do was hook it up and turn it on – no fine tuning or adjustment was necessary. It runs very cool, barely warm to the touch.

The service was very fast and, as a bonus, the price was about half of what the major brand replacement combiner had been quoted.

Based on these experiences, being impressed with the construction of Steve’s combiner – his combiner design does not use finger stock tuning, which is subject to failure – led us to contact him once we had the translator CPs in hand.

To date our company has purchased over eight bandpass cavities with power ratings of 1 kW to 30 kW, three of Steve’s FM combiners, an FM isocoupler, several of his FM antennas, and a pair of his FM transmitters – one at 300 Watts and one at 750 Watts. Most of this equipment is operating on our mountain transmitter sites at 10,000 and 12,000 feet above mean sea level.

Like the combiners, Steve’s transmitters are in my opinionI think superior in design and display excellent workmanship. They are rock solid and have been running for more than two years without a single problem – despite the same high elevations where other transmitters have cooling problems.

A Small Company But a Good One

Steve is an amazing design engineer, technician, and site engineer.

I think one of the reasons that AAT and Steve have been so successful with his equipment design is that he started out as a site engineer and technician, discovering all of the problems that one might see out in the field with the different types of equipment.

He has had a lot of experience with all types of transmitters, antennas, combiners, cavities, and transmission systems for AM, FM, and TV. So, when he went into the manufacturing business, he engineered and designed his combiners, cavities, isocouplers, antennas, and transmitters to overcome all those problems he found in the other manufacturer’s equipment.

Overall, I have come to view Steve Wilde as an amazing engineer, equipment manufacturer, and friend. He now does all of our work: from the FCC proofs for all of our FM combiner installations, to retuning and repairing one of our high power ERI FM antenna arrays, most recently custom-designed an FM circular polarized antenna for one of our AM station’s FM translator projects.

We plan to continue to buy most of our future equipment needs from his company.

For more information on AAT and Steve Wilde, click here.

He has been in the broadcasting business for 42 years and now owns nine radio stations: 3 AM’s and 6 – FM’s operating from three studio locations & over 23 different transmitter sites throughout the area.