[April 2021] When a listener cannot hear a station due to interference of any kind, it is a serious issue.

After all, listeners are ratings, and ratings are money.

Tracking down any intermittent problem can be a very frustrating task. Complaints of intermittent interference are particularly irksome, especially when they seem to be localized in an area inconvenient to monitor.

In this article, we will take a look at using a Raspberry Pi and an RFEngineers’ Watch Dog for a broadcast engineering-related automation.

The project leads to a portable, battery-powered system, using a Python program and a few inexpensive components, along with the Raspberry Pi computer and the RFEngineers’ Watch Dog receiver.

Once constructed, the system can be placed in a listener’s home, place-of-work, or other location. It will then automatically gather data useful for tracking down the source of interference.

In this system the Pi is used to tune the Watch Dog to a desired frequency.

Then, an indicator of interference – the signal-to-noise ratio (SNR) for example – is monitored. If the SNR drops below the user defined thresh-old, interference is present. When such interfer-ence is detected the Pi records a few seconds of the station’s audio to a WAV file, and station parameters, RSS, SNR, multipath, date and time, are written to a log file.

After gathering a day or two of data the system can be relocated and run again. At the end of the process you will have audio recordings of the noise, signal strength measurements and other parameters from multiple locations. Armed with this information you should find tracking down the problem considerably less irksome!

WHY WE USED THE WATCH DOG

In addition to the Raspberry Pi, a key component of the system is a computer-controllable receiver. We use the Watch Dog receiver since we have extensive experience interfacing it with a Raspberry Pi.

The Watch Dog receiver is controlled through a USB (serial) port. As a serial device, it is very easy to connect and control in a variety of ways. This extensive interface is referred to as the Watch Dog’s “Serial API.” Documentation can be found at http://www.RFEngineers.com/WD1.

The Watch Dog’s serial interface makes it ideally suited for automating with Python. We were able to the write the Python program in about two hours. Having access to previously developed Python code made the task even easier.

Our Python program, InterferenceMonitor.py, is available free. You may adapt it to fit your specific needs.

We used a Raspberry Pi 3 Model B with a fresh install of Raspbian OS, but just about any Raspberry Pi should do. The Raspberry Pi was powered using a portable battery-based USB power supply.

The first step in getting InterferenceMonitor.py running is to find the Watch Dog’s serial port in the Pi. Run the following Linux command on the Pi to determine this:

Look for a line containing a message like USB ACM device. Copy down the full tty value – For example, ttyACM0 – for a later step.

Next, run the following two commands on the Pi to install some prerequisite software. Note the spaces, but watch the wrap:

4. Now, install the InterferenceMonitor.py program directly into the Pi from our GitHub repository:

5. Open up the InterferenceMonitor.py program in your favorite text editor and change the following parameters:

b. MIN_SNR – This is the minimum acceptable SNR, in dB. For example, 10. If the SNR drops below this value then the setup will begin record-ing interference measurements and audio samples and continue to do so until the SNR returns to this level or higher.

c. POLL_SECS – This is how often the program will query the Watch Dog via its serial interface to get the latest SNR reading. Leaving this at the default value of 2 seconds should be fine for most uses.

e. USB_AUDIO_DEVICE_INDEX – Leave this parameter set to the de-fault value of -1. You will need to run the interferenceMonitor.py pro-gram to get the proper value for this setting. That will happen in Step 6.

6. Run the InterferenceMonitor.py program. It will display all of the audio devices that it detects and then stop execution because the USB_AUDIO_DEVICE_INDEX setting has not been changed from its default value of -1 in Step 5e above.)

The last few lines of output should contain a list of available audio devices.

In our case the sound was available as “USB Audio Device” with an Index value of 2.

7. Reopen up the InterferenceMonitor.py program in your favorite text editor and now change the USB_AUDIO_DEVICE_INDEX setting to the Index value obtained from this step. 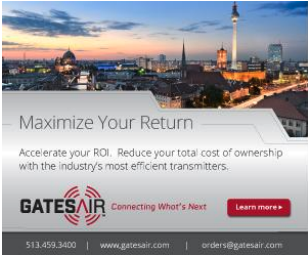 MAKING IT ALL HAPPEN

You should now be ready to run the program.

Once the program was running, disconnecting the antenna from our Watch Dog receiver was enough for us to simulate interference.

Re-connecting the antenna to the receiver caused the InterferenceMonitor.py program to return to its default state.

You can see here how the simulated interference period left us with a handful of audio samples (WAV files) and a spreadsheet of instrument readings (CSV file) from the period.

A Raspberry Pi UPS will prevent the file system from being corrupted if the battery runs down before you can halt the system.

Similarly, adding a USB thumb drive for sound and data file storage will reduce the chance of SD card corruption in the event of an unexpected shutdown. (Files are automatically directed to the flash drive when InterferenceMonitor.py is run from the flash drive.)

And, setting up WiFi Access on the Pi will al-low you to grab the data or make adjustments to the parameters without disturbing the system.

A Raspberry Pi and a bit of Python code can be a great “Swiss Army knife” for broadcast engineers.

Our total time invested in building this tool was less than 4 hours.

This article will hopefully get you thinking about other opportunities and ways for uniquely solving issues that arise in your day to day work.

Dan D’Andrea is the “software guy” at RFEngineers.

He is an amateur radio operator, embedded systems enthusiast, Software-Defined Radio (SDR) hobbyist, and a professional software developer with over 20 years of industry experience.