[June 2020] As our series continues, we move from the pioneers to some of the next wave of audio engineers who advanced the presentation of audio on the air. Jim Somich interviewed Cornelius Gould a dozen years ago.

This “update” includes some of his more recent comments and reflections on the latest technology in the audio arena.

At this point, having spoken with two of the major established processor designers, it might be a good idea to check in on a couple of the “new guys on the block” as their ideas come to the marketplace.

Jim Somich: Cornelius Gould is one of those newer guys who came into the DSP scene, but I know he has been working in analog for years. Corny, who are your gurus? Who influences your processing ideas?

Cornelius Gould: Several people have influenced me over the years; definitely Steve Church and Frank Foti. Both of them are examples of how ordinary engineers with a dream can take them and grow them into a lifestyle.

They also show the joys of having to continually raise the bar on what they do, aim to top that, and reset the bar again.

Others include Glen Clark and Bob Orban – what current processing geek has not been influenced by them?

The thing I admire most about Glen’s work is that he showed us another way to look at the audio processing control system design.

His work on the Audio Prism showed me to never be afraid to look at audio processing from a different angle. Just because an idea is a radical departure from what was done before does not make it bad.

My other influences have come from my contact with various end users over the recent years.

As you and others are aware, I have been heavily focused on trying to teach the new generation of end users about how to use audio processors. Along with this, I have had a few seminars on the topic at a couple of state broadcast conferences. Out of this came some ideas on different approaches to user interaction with an audio processor.

Jim Somich: What is your DSP experience? How do you operate? What development systems do you use?

Cornelius Gould: I dabbled off and on for about 10 years with DSP development systems. I had been heavily researching DSP concepts and developing new ideas that can only be done with the power of DSP. 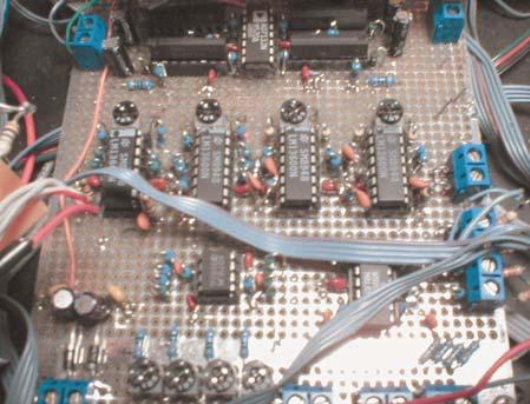 The op-amp base “Audio Chameleon” made its debut on several FM stations in the Cleveland market. Gould’s “Internet Chameleon” was largely based on VCA technology

Jim Somich: Do you have a current DSP project? Can you talk about it?

Cornelius Gould: Currently, I am working on some new ideas that I just could not do in analog – namely, having the audio processor be smart.

Since we are basically dealing with computers, whether a hardware-based DAP box, or PC software, the idea is: why not take advantage and really build some “intelligence” into the audio processor?

Since a lot of what I am working on has not been tried in any existing processor yet, I naturally will not elaborate more on this right now.

You never know what I may do with these new techniques!

Jim Somich: What, in your opinion, is the current state of audio processing and what do you see in the future? Are you doing anything with processing for HD Radio?

Cornelius Gould: The bulk of what I am experimenting with applies directly to HD Radio and any other “coded audio” based content delivery system.

For almost ten years, I have been running various streaming stations on the Internet. In my natural effort to make them sound their best, I have been developing a steady stream of tools to deal with coding artifacts. As luck would have it, the new wave of digital broadcasting could be described simply as “streaming audio over RF.” Almost overnight, it seems, there are suddenly lots of outlets where I can throw my ideas.

[One culmination of this design work was in view at the 2010 Spring NAB Show. The Omnia 11 was displayed, the result of merging Gould’s work into Foti’s, in effect a reworking of many of the assumptions driving processor development in recent years. 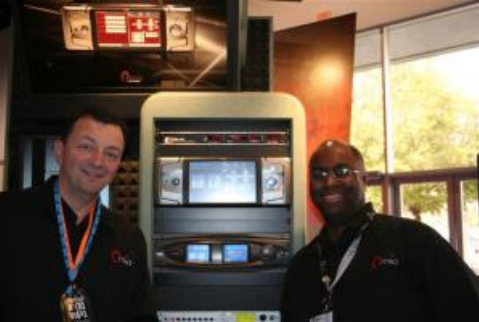 Since 2010, Gould has built his work into something called “G Force.” He also worked with Leif Claesson on the Omnia 9, which grew out of a software suite into a highly flexible processor.

BDR: Corny, exactly how would you describe G Force and what it can do for a broadcaster? Or, is this mostly a streaming technology?

The Multiband AGC’s are improved over the original Omnia.11 (orange screen) version, and are able to provide a sort of “3D audio” sound depth. This is especially important with formats where lead singers and sometimes lead guitars are mixed “up front.” In the previous version (and most other processors, for that matter), these distinctions tend to be “flattened out.”

The multiband (dynamic) limiter system, due to its much lower IMD specs, are able to be driven deeper than just about any processor out there, and can still “hold it together.” Many are shocked by how well they work! Because of this, you gain an extra tool in the toolbox that can help you sculpt your signature even further, if desired – or can provide that extra dB or so of loudness in a very transparent manner.

The versions of G-Force beyond 3.0x bring more features to the table, including a super low IMD lookahead limiter that brings the HD / DAB side of the table to the forefront.

The Clipper – Oh, the clipper!

Frank Foti has kept busy improving on his clipper system. With each improvement to the clipper, the user is able to unlock another level of performance beyond the original version for the same level of loudness as before.

BDR: So, with that in mind, is there anything left that can be done with audio processing – or have we reached the total maturity of the technology?

Cornelius Gould: I am not so sure how much louder the world can make audio processing, but there are definitely signs that we can further improve on lowering the level of distortion for the same level of maximum loudness you can gain.

For markets that are not so crazy loud (the majority of them these days), stations could – and should – expect a better level of clarity for their given loudness levels.

As the world shifts to different ways to push out content, with radio being just one of them, the challenges of audio processing changes pretty significantly. Podcasting brings the most radical shift. Sure, you can pass your final podcast mix through processing … and make it sound like a radio station…but podcasts work best with some art of sound design behind them. This makes podcast production more like producing an album vs. a radio program if one cares to takes advantage of the ways that that medium is different.

BDR: Some years ago, a few processors added “dayparting” to their feature set – changing the way the sound of the station was delivered as the day progressed. This did not seem to have many adherents. Does this mean that a station should have one “sound” and be consistent throughout the day and week?

I think as digital audio processing technology has improved, we find them becoming more consistent than their early counterparts. As a result, many of the issues of dealing with one type of content vs. another has become less of an issue and most stations are fine “setting it, and forgetting it.”

Another factor is time. As the demands of a full time radio station falls onto the hands of fewer and fewer staff members, one must balance their precious time to matters that are most important, and everything else happens when it happens. Few have the spare time to worry about the sound of every piece of audio that passes through the air chain. This makes the improved consistency of today’s processors a welcomed change.

BDR: Finally, looking ahead, then, what would you like to see added to the audio processing units as we know them? What do you think will be added?

Cornelius Gould: Hmm. I have ideas, but I just do not want to tip off others! Ask me again whenever I retire permanently from the field. 🙂

Jim Somich and the BDR: Thank you sir!

Challenges to broadcasting are everywhere, from iPods to satellite radio to Internet Radio – and to that unknown new gadget or gizmo that is just over the horizon.

In fact, the way things have been going over the past decade, it even might appear that free-over-the-air terrestrial broadcasting has a target painted on its back. I think the future is brighter, and the audio processing of the future will be a large part of it.

That will be part our theme next time.

Jim Somich passed away suddenly early in 2007. He always was actively interested in audio processing, always pushing the envelope at his company.

Jim was also very generous with his time, making room to help a number of broadcast engineers to get started. From my point of view, it was his input that made this series possible. – Barry Mishkind