Written by Bob Burnham Posted in People in Broadcasting.

Veteran broadcaster, teacher, and friend, Dick Kernen passed away of natural causes at home in Dearborn, MI on December 18, 2020 at the age of 82. 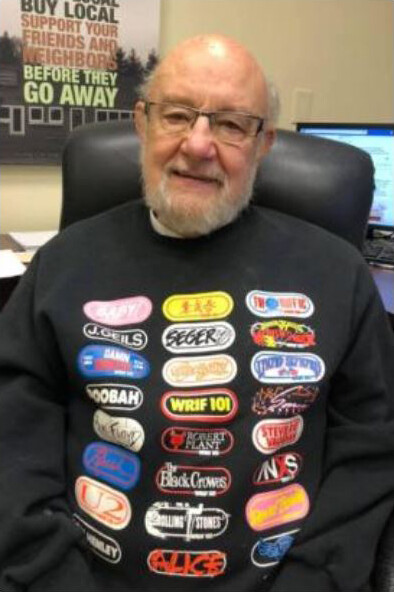 So how could knowing someone like Dick Kernen change my life? Somehow he did.

I was hired as Tom Profit’s right hand technical person, and joined the Specs Howard family as an employee. Dick would often catch me in the halls, telling me to come into his office – he had something to discuss or fix or give me.

Those would often turn into animated discussions, beginning with “What’s new?” which would lead to us exchanging hilarious horror stories about someone’s misadventure in the business … or some success stories! He knew everyone I knew, and I knew many of his friends.

I quickly became one of Kernen’s friends working at Specs Howard and afterward as well. Why? Because we both loved the business and both realized there was no need to retire if what you are doing what does not seem like work. We had a lot in common.

Dick was all thumbs, though, when it came to technical matters and he would sometimes ask me to explain something that he did not quite understand, or “how can I make this work?” One of my greatest joys at Specs was sharing with others what I had learned “the hard way.” I did not know everything but Dick was always a great listener as well as a great teacher, and he was quick to heap accolades on someone.

Once while going to my car in the Specs parking lot, he stopped me, shook my hand and said “Congratulations. You did it!” Puzzled, I said “Did what?” My work was my pleasure, but I had launched specsradio.com, the school’s first music-intensive Internet radio station, and that was “something” in Dick’s eyes. It was the last major project I had completed as an employee, but not the end of our friendship. Far from that.

He had a wickedly sarcastic and hilarious sense of humor. But rightfully so, he seemed most proud of what he had done for others through his association with the Specs Howard school. Dick would often say “You can’t walk into any radio or television station without running into a handful of Specs Howard graduates.” But it was Kernen who was the master “engineer” who had fit so many of those “pieces” into the right place.

During the course of my prior career, I encountered many of Kernen’s “pieces” who became good friends, because they were good people to begin with. They had been passengers on Kernen’s infamous “Clue Bus” which was basically his way of telling students to get their act together and be realistic.

The first year I worked for Specs Howard School, a staff season’s party was held at Kernen’s home in Dearborn. After most everyone had left, Dick spent a good amount of time giving myself and the wife the grand tour and chatting with us about everything. We were just getting to know each other, but he was incredibly gracious and treated us like family.

I remember fondly when I was hospitalized for about a week – the first phone call I received was from Dick Kernen. Truly, he cared more about my wellbeing than my own family.

The school made a Dick Kernen bobble-head and gave them away to employees on Dick’s 50th anniversary in the broadcast business. When I was no longer an employee, he told me I was still welcome in his office anytime. His modest words were “You know I’m just a hood ornament here” referring to his position as Vice President of Industry Relations at Specs Howard School. He said that we could have lunch anytime.

Sadly, those lunches did not occur – at least with me – nor did I have a chance to thank him for teaching me what I learned from him simply by observation.

Thank you Dick Kernen for your friendship.

The industry has lost a giant.

Memorial arrangements are pending. Donations in Kernen’s name are suggested for Hospice of Michigan.

In addition to his time as staff engineer at the Specs Howard School of broadcasting, Bob Burnham has been doing on-air and radio engineering work in the Detroit area and around Michigan for over four decades. You can contact him at: bob@brcbroadcast.com