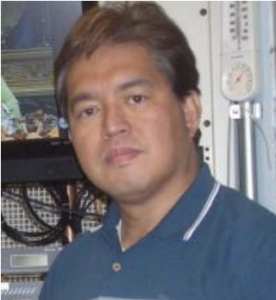 [March 2013] Dealing with sensitive electronic equipment always requires care. But this is especially an issue during dry seasons, when static electricity becomes more of an issue. Here is one solution.

Winter time should be a jolly one but not for our studio cameras. The dry air inside the studio causes some “malfunctions” that make our producers complain and keeps the technical staff (us) busy.

Especially difficult to solve was problems with equipment – like our cameras – that was constantly being moved around the studio.

These troubles – caused by the buildup of static electricity – are what I call gremlins. They ranged from the viewfinders not working to cameramen being zapped when they touch the handles. Bottom line: these gremlins needed to go away and fast.

Dealing With The Static Problem

I felt there just had to be a safe and easy way to drain the static build-up on the cameras.

Some folks said we needed to spray anti-static compounds. But I did not want a short-term solution that would pollute the air inside a closed studio. Some suggested treating the floor, However that, too, does not seem to me to be a very good solution because it can be pricey – and may not be long-lasting.

In the end, I decided we should drain the static by using static drains the way RF guys do it.

It just so happened that there were a lot of RJ45 cables lying around the shop that day. The IT guys had pulled them out the day before. The IT guys said to just help myself – and so I did just that.

Thinking about, it seemed using those CAT5 multi-pair Ethernet cables should do the job. Ohm’s Law says that the resulting impedance of resistances in parallel should be lower than the least resistant branch. So placing all these multi-pairs in parallel should yield low impedance between the ends. That will make a good static draining cable. 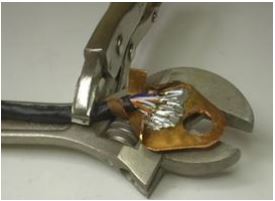 CAT5 cable was soldered
to a piece of copper strap

Then there was the matter of providing a metal brush that makes the contact from the camera pedestal to the floor. I looked around and we had plenty of solder wicks. It is copper, looked low impedance to me, and it was already on-hand. 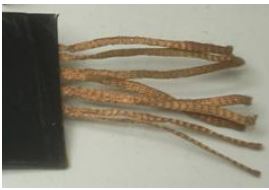 Braid from solder wick at the other end

There was no need to buy anything for this project. Just a couple of pieces of copper strap from the last grounding project, the CAT5 cable, some soldering wick, a few minutes of soldering, and a little bit of beautification (basically nothing but some black electrical tape to match the environment). It did not take long to finish the static drain as shown in the pictures. 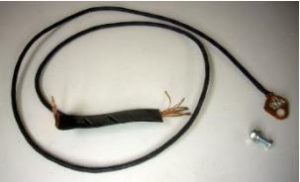 I got the cables installed as shown and waited for complaints from the producers. 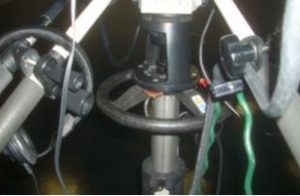 The cable is attached above the pedestal handle 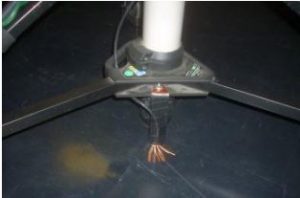 These add-ons to the camera pedestals are not one of the beautiful art pieces in the studio. But they sure are beautiful to me since they work.

In the two winters since we installed our static drains, I have not heard any more gremlin complaints. It looks like the static drains killed the gremlins for good!

Romualdo “Rolin” Lintag, CSTE, is the Chief Engineer for Victory Television Network in Arkansas. His email address is: rolin_lintag@yahoo.com