Be Sure To Look Up!

[November 2019] When you get called out to help a station that is off-air, there is always a certain level of anxiety, if not concern, as to what you will find on-site.

In this case, the station FM had sent picture showing a red light next to “Power Amplifier” on the transmitter. So, it was time to meet someone at the site.

While awaiting station personnel to meet up with the key, a good use of the time is to check around the transmitter building.

There are several things that can be seen and related to the client: the state of site security, the condition of the building and access road, and, of course, what can be seen of the antenna. (Sure, some antennas are hundreds of feet above the ground, but you do what you can.)

At this particular site, the long promised fence around the transmitter building had not been installed, nearly a year after the site was in use.

Fortunately, there was no evidence of vandalism this time (the last time the station was off-air, it was pretty clear what the problem was, when a quick look showed that the power generator was missing!).

Looking at the exterior of the transmitter building, one could see that the hole where the coax passed through was not sealed with rubber or foam – a clear invitation to local insects and other pests. But, was an invader the reason for the transmitter failure?

The next logical step – OK, some might say it was the first thing they would do – was to look upward. This time, there was no real question about what was going on: 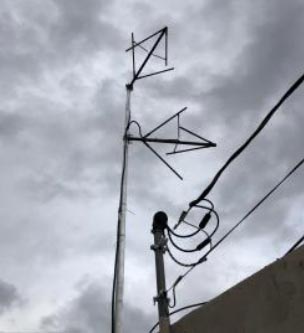 By now, the station representative had arrived. And, sure enough, the transmitter display quickly showed a fault light and removed output power by itself.

Fortunately, after reducing power to approximately 15%, the transmitter came back up and seemed to happily stay up, albeit with a VSWR reading of 3.5:1 indicated. A little careful experimentation showed that 15% was about the most power one could safely run, and have the transmittter stay reliably on the air.

At that point, there was little else to be done aside from calling in someone to attend to the antenna and connecting harness. Properly aligning the antenna would resolve part of the issue, but the connectors and coax needed to be carefully inspected, to ensure the coax was not pulled out of the connector, or otherwise damaged.

Once the antenna and harness were put back to “normal,” so was the transmitter. And the hits could just keep on comin’!

The situations depicted in The Worst I’ve Ever Seen! are not designed to embarrass anyone. The purpose is to show some of strange, curious, or just odd things that happen, and how, by being attentive, we can find the problem, and get corrections under way.

If you have a picture or story that will help others to deal with the things that happen in real life, please share them with us all. Thanks!