[July 2012] For Jim Pollock, the battery compartment in one particular FIM-21 became a source of intermittent power trouble. Jim shares his solution: a modification that has proven to be useful in his work.

The FIM-21 is a highly accurate, easy to use Field Intensity Meter. It has been an industry workhorse for decades. 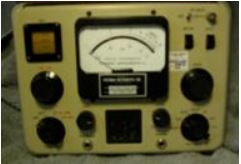 Most of the time.

During a field measurement trip, a friend told me about how his FIM-21 was giving him fits with sudden outages. The unit would just go dead all of a sudden.

Shaking the instrument usually brought it back to life, but then my friend found he had to recalibrate. He had tried stuffing folded paper to get the D cell batteries to align better and keep going, but the outages still occurred.

More recently, I experienced a similar outage problem while on the road. It is a heart breaker when it causes everything to stop while you try to deal with it. My friend and I both tried the usual stuff like spinning the batteries, cleaning the contacts with a pink-pearl eraser, etc.

The problem was finally traced to a spring loaded pressure plate which would bind on occasion and not provide adequate or balanced contact pressure on the D cell battery stack.

Normal, proper repair of the D cell compartment could be rendered only if the instrument was sent back to the “shop.”

Because the FIM was needed in two back-to-back field assignments, and the schedules were very tight, sending it to company for repairs was not an option. While a formidable task for basic hand tools, it was deemed a better solution to work around the problem.

A plan was devised to modify the FIM-21 to run on a pack of AA batteries since AA batteries are more available and they are often on sale at substantial discounts in lots of 20, 30 or more. At the same time, we wanted to be sure to preserve normal D cell operation.

The modification we decided to implement on an FIM-21 to utilize AA batteries seemed to include the following criteria:

The first task was to ensure AA batteries could be used to substitute for the D Cells normally used in the FIM-21.

We can determine the system power requirements by referring to the manual. Taking our own measurements would verify the data and provide assurance the modification would work as expected.

Often, capacity is specified in terms of ampere-hours. However, ampere-hour capacity often decreases at the upper current levels of the curves. Also, batteries used intermittently will achieve longer cumulative running times under the same load conditions compared to those used continuously.

In this case, we measured the following operating parameters:

To make sure AA batteries would stand up to the FIM-21’s power needs, we needed to start by calculating the expected battery life from a fresh set of AAs.

The current drawn from the battery and a given terminal voltage are used with the battery’s capacity curves to determine the run time limit as to when the battery stack should be replaced.

The stop limit for the FIM-21 is when the stack terminal voltage drops to approximately 7 Volts. This is approximately to 1.16 Volts per battery in a stack of six AA cells. According to information from Duracell for AA cells with the Part #MN1500, the value of 55 mA on the current discharge axis intersects the 1.16 Volt curve at the point of approximately 30 service hours. 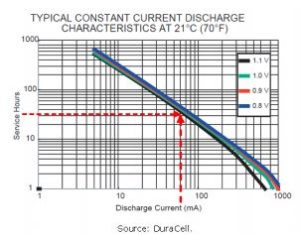 The battery life curve for a DuraCell AA battery

To convert that into a useful measure of battery life for field measurements it was assumed that each measurement requires 60 seconds if the FIM is set on a fixed frequency, including calibration steps.

Therefore one hour of battery use equates to approximately 60 measurements.

As mentioned, the useful life of the batteries ends when less than 7 Volts is presented to the FIM-21 circuitry. This equates to the “5” on the outer scale when in the BATT mode. 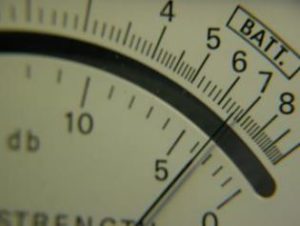 Typical reading with a new pack of AA batteries

Although the illumination lamps are included for night readings, they offer an excellent stress test for the battery.

For example, if the meter reading dips below “5” on the upper meter scale in the “BATT” mode with the lamps on, then the batteries should be replaced immediately.

With this information, we can quickly factor the data up and get a good indication of an expected operational life.

2 Battery Life if Meter and Frequency Dial Lamps are in use during measurement: Battery reading below “5” in the BATT mode means that replacement is necessary.

* In both cases, the volume was operated at approximately one-half of the maximum volume.
We considered additional tests with rechargeable batteries, but since those discharge even when not being used, it was felt the relatively cheap price of AAs made them a better choice.

With all this information in mind, it is clear that AA batteries can make a useful replacement for the D cells.

It remains now to find a non-destructive way to insert them into the FIM-21 case.

What It Will Take

Before we discuss the modifications, it would be a good idea to take a look at the power supply section of the FIM-21.

You will find that on the next page. 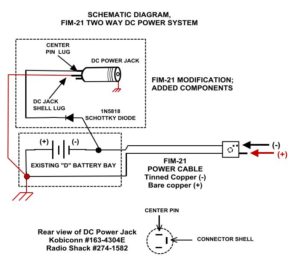 Some notes on this schematics:

Prepping For the Modification

Now it is time to get ready to do the work, it is good to assemble all the parts and tools.

Most all these parts and tools should be available at your local parts shop.

Tools Used For the Modification

The Operating Room is Ready

The first thing to do, as mentioned earlier, is to disassemble the FIM-21 back section from the front. Put the front section aside in a protected environment so that nothing falls into it, neither dust nor particles from the modification. 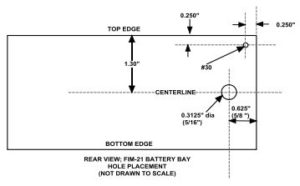 From a safety viewpoint, it is better to make several passes at drilling a large hole by starting with a 1/16” drill bit, and making the hole progressively larger with sequentially larger drill bits. The sheet metal work-piece will have a lesser tendency to buckle or be grabbed and spun out of your hands by the drill.

Notes The 5/16” hole shall be located on the centerline. This will provide clearance for the “D” batteries if the DC Power Jack is not used.

Positioning on the center-line is not especially critical.

As we put the parts together, here are a few detailed pictures to show how the pieces fit. 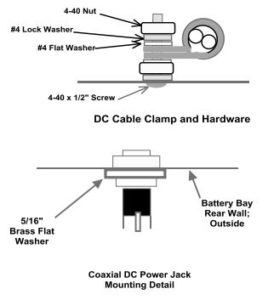 The importance of locating the DC Jack at the centerline is shown in the following clearance diagram. Without this clearance gap; the modification loses its transparency. 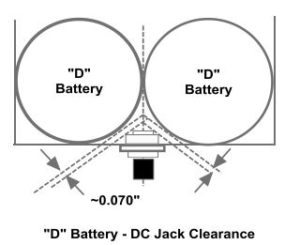 The clearance is attained by adding a 5/16” brass washer at the outside in order to decrease the connector shell height above the interior floor of the battery bay. 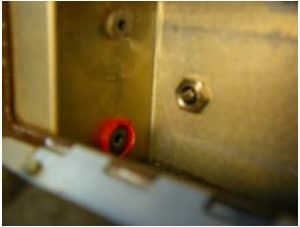 The DC Power Jack shown on the back plane

If you have followed the drilling diagram and installed the jacks and cable clamps as noted, your FIM-21 back shell should look like this: 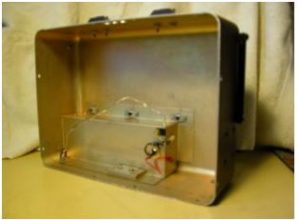 The internal side of the battery compartment

The next picture is a close up of the items that have been added as a part of this modification project. 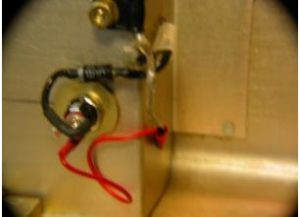 The power cable anchor and strain relief was relocated to the upper left corner of the battery bay. This change resulted in about two more inches of cable run.

The 1N5817 Schottky barrier diode, with its leads encased in heat shrink tubing, is barely visible above the DC Jack.

The redundant RED ground wire connects the DC Power jack shell to the chassis ground. Although the shell is mounted to the chassis, the redundant red wire assures continuity in case the retaining nut on the DC jack work loose.

The existing “D” battery lugs are riveted, and should be approached with caution to prevent damage. Heat shrink tubing on those lugs were replaced after the Schottky rectifier and ground wire were soldered in.

Each lug was carefully de-soldered with fluxed braid, but the existing wires were not removed.

The wiring of each lug was completed one at a time in an orderly sequence to prevent confusion and wiring errors.

All that remains is to put the AA batteries into the holder and insert them into the FIM-21 battery compartment.

Why not use all eight available battery slots? Primarily to avoid shortening the life of the meter lamps by exceeding their rating. 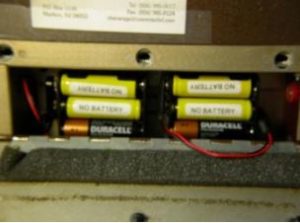 In the course of doing this project, I made a list of tips and some hints that might make this project easier for you.

Use a variable speed drill:

Avoid using a single speed drill. You will be much more accurate with a variable speed drill because of better manual control over start-up torque.

Verify the voltage polarity at the end of the DC Power cable with the “D” batteries installed in the battery bay. Make a sketch of the connector, and mark the sketch as to which pins are (+) and (-).

Heat-shrink tubing is your friend.

Cover all solder lug and connector pin solder joints with heat shrink tubing as a strain reliever against vibration and mechanical tension.

Adopt a scheme that sorts out the direction of current flow.

Use Black insulated stranded wire and Black heat-shrink tubing for the negative (-) power side of the batteries.

Use Red insulated stranded wire and Red heat shrink-tubing for the positive (+) power side of the batteries.

Remove all drill turning chards and filings from the project site. De-burr the exit wounds of all drilled holes, and dispose of the metal filings. Otherwise this junk will find its way to become lodged between the plates of the air-variable capacitors. Do not use sandpaper – it will damage the Iradite conductive plating.

A handheld drill bit, which is substantially larger that the hole being dressed, can be used as a de-burring tool. A sharp pen-knife is another option.

Do Not Use Wall Warts!

Yet another warning. There are wall warts out there with a (-) center pin but most wall warts are wired for a (+) center pin. The blocking diode will prevent catastrophe, but to prevent issues if someone else uses your FIM-21, just avoid using wall warts.

James W. Pollock, P.E., C.B.T., C.B.N.T, is a consulting engineer based in Mt. Laurel, NJ. He can be contacted at: jim@jimpollock.net