A Different Sort of Capacitor to Check

As most competent engineers know, it is not “if” a piece of gear will fail, it is when. Over time – it could be days or weeks … or years – components age and change valid. As a result, voltages and currents also change, and even exceed the voltage or current rating of circuit components.

Different components react in different ways. An old-line engineer sometimes may smell a circuit board and tell you exactly which component has failed; a common comment is “that resistor released its smoke to tell us it went bad.”

Other components can fail more “spectacularly,” exhibiting discoloration, cracking, exploding, spewing their insides – or even catching on fire.

The best way to avoid catastrophic failure due to some component changing its value is to catch it early, before it exceeds circuit safety limits. Good maintenance includes making many measurements at different test points, to make sure the “normal” voltage and/or current has not changed.

Some engineers have kept logs of their transmitters, or other gear, for many years, and can see evidence of trouble early on. With experience, they can pinpoint potential problems before failure occurs, preventing downtime, as well as equipment damage. Infrared cameras and thermometers have made some of this regular checking easier, as temperature is often a leading indicator of trouble ahead.

A focal point in many such circuit inspections are the capacitors. These range from small electrolytics to shunt capacitors in antenna tuning units to large power supply caps.

Not Just in the Transmitter

For example, periodic inspections can reveal dried out electrolytics, or caps with contents that have liquefied. The Gates One and Five transmitters are two that famously require periodic capacitor replacement to avoid failure.

However, in addition to the transmitter and associated items, it is important to check the entire facility. In fact, that is the lesson from this example – which comes from an air conditioning unit. 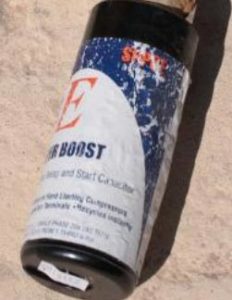 Is it necessary to inspect an air conditioning capacitor? Absolutely.

Many transmitter and equipment rooms have dedicated cooling systems these days. In addition to the “normal” environmental stresses of the West or South, racks full of gear often generate a lot of heat. If the air conditioning fails, components could get very hot, leading to premature failure. There are few things more annoying than opening the transmitter room door and finding you cannot keep your hand on the transmitter, due to the heat buildup.

That is why many plants split two or more AC units to provide a safety new, so transmitters and other critical equipment do not bake. Unfortunately, some sites have only one ventilation system – occasionally just a vent that opens, if the hinges have not seized up. The result can be bad. 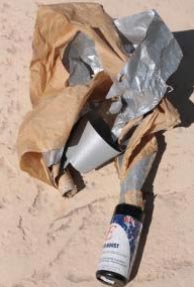 When the insides go outside, it is not a good sign!

Of course, we are not necessarily suggesting that you take your air conditioner apart yourself. Although more than a few engineers have experience with air conditioners, compressors, etc, it might be a good idea to have a local HVAC company come by to check out the system.

There are several good reasons this might be cost effective in the long run. First, they will have the right tools and parts to do the job. Secondly, they work on these units all day, and will often “see” things that you might miss.

Another factor is that if you build a good relationship with your local HVAC service company, perhaps via a maintenance contract, they likely will respond faster and more effectively in case you do have an equipment breakdown.

To some, it seems like there is no end to the things that need inspection and maintenance, and they just wait for things to happen. To others, it is a challenge to identify and control the entire plant – reducing or eliminating downtime. We encourage you to make the choice to be proactive.