A Clever Way to Reset an Audio Chain

[March 2016] It is among the most annoying problems: your transmitter is on and running well, but the audio has disappeared. Often that means stopping what you are doing and taking a long trip to find out what was wrong. Dave Mandelbaum and a client found a way to stop the trips.

Like many manufacturers, we get calls from folks who have requests for solutions for some uncommon or strange applications – sometimes even unusual one-of-a-kind problems.

Our company certainly really does love to help out in such situations if we can.

Recently, I received a call from Frank Stas of the Talking Info Center in Marshfield, MA (ticnetwork.com).

Stas was struggling with a problem: his Internet modem and other equipment in his primary audio chain were locking up and not coming back online after they experienced a momentary power failure or spike. Sometimes gear would even go berserk all by itself, killing his primary audio feed.

When this happens he has to drive over 40 miles to reset the power to the equipment.

Of course, Frank does not like to do this and felt this may be a problem that others might possibly experience to varying degrees – especially now that more and more transmitter sites are beginning to rely far more heavily on their Internet connections for IP-based remote controls, STLs, and audio processing tweaks.

As we discussed his situation, Stas focused on his key need: he wondered if we at DM Engineering had anything that would save him the trips.

Basically, he wanted something to sense silence and automatically turn the affected equipment off and then back on after a few seconds delay to correct the problem. After a bit of noodling the problem around, I recommended our Silence Sense Jr. Silence Detector along with our Studio Solid State Relay Pack. Together, they seemed like a good pairing to do what Stas wanted.

The basic idea: The Silence Sense Jr. would be triggered by the loss of audio, in turn causing the Solid State Relay to operate, lifting power for a short time, and hopefully restoring everything to normal. 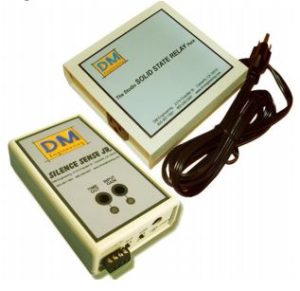 Here is how it would work: The Silence Sense Jr, would be installed with its relay output set to the normally-closed option, and its momentary output option selected.

This momentary option acts as a one-shot, with the relay contacts operating momentarily only once at the end of the pre-determined silence delay time. The N.C. output of the Silence Sense Jr. controls our Studio Solid State Relay Pack which will then switch up to a 5 Amp, 115 VAC load. The setup automatically resets with the re-application of audio – and only then will the relay operate again after an audio failure.

This combination of products will sense the lack of audio after a user pre-set period of 7 seconds to 4 minutes, (Stas set it to 2 minutes for this application), and then duck the AC power for a second, allowing the affected equipment to re-boot properly. However, for this particular site, Stas felt the one-second time period might be a little short, so we re-wrote the code to increase the momentary relay time constant to four seconds.

The goal was to guarantee a proper power reset – and no more long drives to the transmitter site.

So far it appears to have worked well

Flexibility to Stay on the Air

Stas had an additional idea that made his situation even more bullet proof. He also has a secondary, though less desirable, audio stream to the transmitter site. But it could keep him on the air in an emergency.

In this layout, he was able to use a silence sense device (let us call it silence sense #1) set to a 30-second delay. The device has no momentary contact capability but does have a couple of Form C relay contact outputs that stay energized as long as the device experiences audio. Stas hooked up his main audio stream to the normally closed relay contacts and the secondary audio source into the normally open contacts of the Form C relay.

The common terminals on silence sense #1 feed the program audio to both the transmitter, and the Silence Sense Jr.

If the Silence Sense Jr. does not detect audio, even after the switch has been made to the secondary path, it would be assumed the Internet modem or other equipment in the audio chain has failed.

After the reset of the Silence Sense Jr. and Studio Solid State Relay Pack, the primary audio feed is restored. With this, the silence sense device #1 controlling the audio routing relay will reset (de-energize) and return to its normal operation so the main air feed is restored through the normal equipment chain.

Problem solved! With two audio sources and the reset capabilities, the unwanted trips to the transmitters should a thing of the past.

The end result of this configuration will be an automatic reset of the AC power to all the devices that are vulnerable to a power glitch or failure, and cause a full reboot.

Let Us Know What You Need

We continue to invite inquiries for solutions that may seem a little off the beaten path; that is one way we get ideas for development of products that are needed – and not only for broadcasters.

As one example, one of our Silence Sense Sr. (a silence sense detector that dials predetermined phone numbers and transmits DTMF tones) was was being used to monitor a grain storage facility for cattle – calling out to the farmer when a certain low level of grain had been reached.

We are only limited by our imaginations!

Frank Stas may be reached at:
frankj5@comcast.net or Dave Mandelbaum at:
dave@dmengineering.com.