[September 2011] Whether you are looking to reduce your phone bill, or for portability, Voice over Internet Protocol (VoIP) has become an option worth considering. Recently, I tested one of the options – Vonage – and found a lot to like.

At one time, there was only one kind of telephone line – everyone had a hard-wired, copper landline. The 1970s brought us those large, trunk-filling mobile phones. The 1980s brought cell phones. And then came the Internet.

Starting in the late 1990s, software codecs made it possible to send audio across the web to another computer. But it took a few years for consumer devices to start showing up, making it easier for non-tech heavy people to set up, as well as the ability to connect with individual phone lines.

The only problems were that it was not always easy, the quality often was pretty poor, and disconnection was a constant hazard.

On the VoIP Path

Personally, VoIP appealed to me for two main reasons: (1) I liked the idea of being able to take my phone number (and calling plan) with me, calling and receiving calls from anywhere; and (2) Long Distance charges were still a major cost whenever I got on a long call, especially to Europe.

The early VoIP implementations were largely “take your computer, a headset and a microphone” – and really were not very convenient for quick calls or incoming.

About six years ago, the solution from Vonage was to provide an interface box you could use to connect a regular phone. The interface could be taken anywhere a high speed Internet connection was available. With many hotels and other businesses providing Ethernet and WiFi, it seemed ready to use.

Unfortunately, the early versions of Vonage and their competitors fell a bit short of reliable and convenient. In hotel rooms from California to Indiana to New York, I spent more time talking to Customer Support (often one of those kind people from about 10 time zones away) than using the service.

Problems included port-blocking in the hotels, sometimes trying to interface with WiFi, and often it was the speed of the hotel’s Internet service. And once connected, echo, reverb, and lost connections were too common.

It was much easier to use the cellphone, which by now had “free” long distance. I put the VoIP products aside.

This summer, I was prompted to try a few VoIP options again. The first one was Vonage, which showed up on my doorstep in just two days.

The new Vonage box – just over 4 inches square by ½ inch thick – plugged into my router and, even given the “first time” handshaking, I was up and talking very quickly. 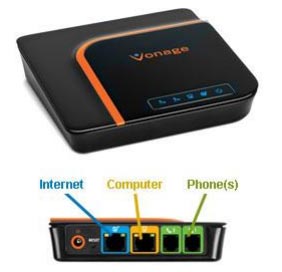 I first tried a couple of local calls, and they connected right away, with no trouble. Trying to stress the Vonage box and see how good the service was, I tried some friends in England and Germany. The results were impressive, especially considering my prior experiences. I detected no echo, no latency. The calls, to my ear, were as clean and clear as any local call.

Taking my Vonage box out to another site, the system again quickly synced up and my home phone number was working where I was sitting.

Between the easy setup and the quality of the audio, I was impressed.

Just like the more traditional phone services, Vonage offers a number of free and optional features.

Additional numbers, virtual numbers, toll free numbers, and a software package to use your number from your computer (useful in WiFi only areas, for example), are among the add-on options available.

This past month, Vonage announced another service that allows you to make any number, including a cell phone, as an “extension” of your Vonage account. One extension is free, another can be added. Want to make long distance calls from work, but not on the company’s dime? Set up as an extension. Want to make international calls on your account from a cell phone? Set that up as your extension.

All of the Vonage features, including a list of your incoming and outgoing calls, are controlled by a web interface. Just one example: if you forget to forward your phone, just pop up a browser and set it up in a minute. Even better, you can set up so incoming calls ring your home and cell phones at the same time, so you can give others just one number, and never have to remember to forward your phone.

I found the customer service at Vonage to be prompt and very courteous. In fact, I called a couple of times to see how they would handle what might be a confusing issue for a new user. Each time they were patient, clear – and they never asked me to reboot my computer.

The Vonage web site also has video tutorials for most of the common questions and problems, so you can see step-by-step instructions on most issues that come to mind.

When I detected a slight deterioration of quality during a heavy computer download, the customer support guy walked me through each step of optimizing the Quality of Service on my router. Since then, I have not detected any issues.

If there are any quibbles, one would be that you cannot block specific incoming numbers. Perhaps that will be added at some date. However, many phones will now do that for you.

Another might be that taking the Vonage box to a hotel with WiFi requires an adaptor. But again, with most us now carrying cell phones, that is not a major issue that it might have been six years ago. The new extensions feature means that unless you plan to sit in a hotel room and talk for hours, it is a non-issue.

Vonage offers various packages, depending upon whether you want to deal with domestic only, or various selections of countries on your calling plan.

In my case, I opted for the World Plan and transferred my long-time home number to Vonage without any hassle. My phone bill dropped by well over a third and, despite some initial anxiety of moving from a hard wire landline to an Internet-based system, I have detected no service loss that I would not have suffered anyway with loss of power.

There are many VoIP services out there. Each has its own feature set and cost structure. But for a general easy install, good feature selection, clean and clear audio, reasonable rates, and solid tech support, I can recommend Vonage without hesitation.

For more information, visit the Vonage site at www.vonage.com