The SOUNDOT AF1 Radio for iPhones

[October 2018] The recent hurricane in Florida showed clearly how critical it is to have access to information during local emergencies and disaster. When the power goes out, there is no Internet, no TV, just radio.

Up to now, that left iPhones useless. Now, the SOUNDOT AF1 brings radio to iPhones.

In recent years, there has been a lot of discussion on how to utilize cell phones for picking up broadcast stations.

Among the reasons broadcast reception was considered important was the need for getting news and information during local emergencies, where there often was no Internet for streaming and no power for TV reception. Radio would be the only link for survivors.

Some phones, especially many Android models, have implemented their radio functions – so long as you have earbuds connected (otherwise the phone is as deaf as most bedside radios in hotels).

Apple’s iPhones, on the other hand, did not enable radios, even though some models did potentially have the capability. In fact, it is fairly well known that Apple has chosen not to enable radios. (Some have thought that was to drive users to iTunes.) With the newest iPhones, there even is no longer a 3.5 mm audio socket.

That left iPhone users in a quandary. To get a radio function, they had to change phones. Most did not want to do so.

A very interesting first time exhibitor at the Radio Show in Orlando was a company called Blackloud, showing their SOUNDOT AF1, a combination earbud, microphone, and control pad to turn your iPhone into a radio. 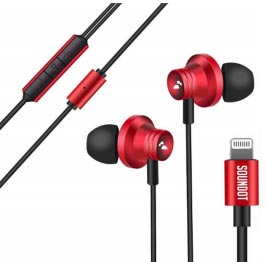 This version of the SOUNDOT AF1 is designed for iOS Lightning devices, and combines 24-bit DSP technology with well-designed earbuds that not only sound good, but control volume and function for answering the phone, listening to audio cuts, and using Siri.

You can hear the radio, anytime, anywhere there is a local signal.

By the way, since the radio does not use the Internet or mobile data, the battery life is not strained.

The app that provides the control system is free, downloaded from the iStore. It sets up in a flash, and you are listening to the radio.

Turning the Radio On

The built-in FM receiver connects to the app as soon as the earbuds are plugged in.

Using the dial, you can quickly set any frequency from 76 MHz to 108 MHz in .1 MHz increments or jump to one of the six programmable buttons. (Yes, you can use the radio anywhere, including Japan.)

Another tuning mode is the scan function, jumping to the next station or the previous one. Operating the radio at about 20 miles from a Class C site and about 15 miles from two different Class A sites, all the stations came in well and stayed solid during my tests.

Once you have selected a station, the user can modify the sound by several methods, depending upon which is easiest for the user. Option 1 gives you bass, treble, and vocal adjustments.

Or you can shape the audio with the 6-band equalizer (EQ).

Regardless of which method, personalized settings then can be saved in the earbud’s flash memory.

It is good to see the earbuds were not an afterthought.

The AF1 earbuds feature both psychoacoustic and mechanical design patents. Together with the dual drivers – 15 mm woofer and 7 mm tweeter – it delivers clean, crisp sound through the entire audio range.

A quick look at the parts of the earbuds, from the metal case to the ear cushions shows the thought put into the product, deserving of the “Premium Quality” label.

The AF1 package includes three sets of cushions, to fit all sizes of ears.

A beta test is ongoing as this is written, to display the RDS text broadcast by stations. Other features are being planned or considered, including an Android OS version of SOUNDOT due sometime in the new year.