[July 2013] Well, someone has to try to listen to all those radios on sale to see which ones are best – and Kevin Raper has accepted the challenge. Here is another in his series of reports.

There has been a lot of noise on the DX Sites about the “new” Radio Shack 20-629 World Receiver, so I decided to get one and put it through its paces.

Immediately I recognized the receiver as an old “friend,” the Sangean ATS-505P. You see, back in December of 2000, I bought myself an ATS505P for Christmas. Unfortunately, a couple of years later, my (now ex)-girlfriend went nuts and broke into my house, threw a bunch of my radios on the drive, and ran over them with her car until she totaled that out on some trees.

Yes, the cops came and threw her in jail, and that was the last I ever heard of her. But the ATS-505P was one of the radios I lost in the incident. Honestly, I did not think it was worth the retail price to replace it, so I never did.

But then along comes Radio Shack with their “Brand New” 20-629 World Receiver. This is the same 13-year-old model made by Sangean, but for a retail price of only $79.99.

Better yet, a $10-off coupon I had made it only $69.99 – less than half the Sangean manufacturer’s suggested retail price. Besides, if I did not like it, I could always return it. So, recently I picked it up on the way to work.

As I recalled my original Sangean ATS-505P, there had been a few points that I did not like, such as its “Soft-Mute” that made a “Chug- 2 Chug-Chug” sound if you tuned it slowly in the 1 kHz tuning mode. It also had an awfully loud “PLL Ring” when you tuned it and a weird feeling detent in the tuning knob. On top of that, it ate batteries like a pig at the slop bucket.

So, I was curious as to what, if any, improvements were made over the years. 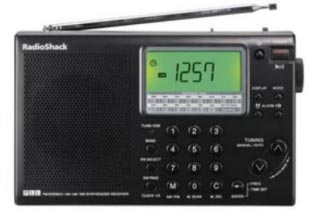 When I first opened the box, I noticed the tuning detents were gone! Tuning is now silky smooth.

Next, I put in the normal complement of 4 AA batteries and lit it off in the “local” mode. Not only did it get WCKI with no overload, it would pick up the other local AM Stations.

Flipping over to the FM, I received my LP-1 and LP-2 stations without even raising the FM rod antenna. However, the high RF on site desensed the Long Wave and Shortwave sections of the receiver, so they did not pick up anything. Of course, my original ATS-505P would only deliver a badly distorted signal no matter which band you tuned.

As I checked out the radio, I was happy to see that the tuning detents, soft mute, as well as the PLL ring are gone. The Radio Shack version tunes like a dream. It almost has the feel of an analog radio but without the backlash and drift when using the tuning knob.

The Radio Shack version did.

To do a real sensitivity and selectivity test, it was out into the countryside, as far away from the noise as I could get.

The performance of the Long Wave section was a hair better than my Grundig G8, although the Grundig had a better signal on AM; the Shortwave and FM were better on the Radio Shack model. It also has better audio from the speaker and on headphones than the G8.

Comparing the radio with the CCRadio-SW, the CCrane beat it hands down on AM Shortwave, but in the audio department the Radio Shack had much better FM from the built-in whip.

The RS World Receiver also has a very important feature, a BFO. It is labeled as a SSB (single sideband) switch, but you cannot select LSB or USB; you just fine tune around the SSB signal until it clears up.

In fact, some broadcast stations, such as AFN and some WWRB broadcasts are already in single sideband mode.

Overall I like the improvements Sangean made to this radio, and I am pleased that Radio Shack has moved back to getting their private branded radios from Sangean, instead of Grundig. I just have been disappointed too many times by the Grundig radios ever since Eton took that brand over. (In fact, the G8 is the only Grundig I still have that has not ever failed.)

Perhaps you already have guessed that this receiver is one that will not be returned to Radio Shack!

Kevin Raper, KJ4HYD, Chief Engineer for WCKI, WQIZ, and WLTQ in South Carolina is, as you can see, an avid Dxer. As long as he has his wife’s permission, he keeps looking for new radios to test. His email is kj4hyd@gmail.com