[July 2011] On July 12th, the FCC will hold an open meeting which will include discussion of a Third Further Notice of Proposed Rule Making to get comments on the impact of the Local Community Radio Act on the future licensing of LPFM and FM translator stations.

Potential applicants will be hoping for an announced Window to apply for these. To help plan for it, Jim Pollock shows how to determine if an open channel is likely in a given area.

Many of those people or groups seeking to construct a low power station have discovered that finding an open frequency in the area they want to serve is not always easy. Many of the reasons for this were discussed in my recent article on the difficulty in finding LPFM allocations.

While we await the FCC‟s actions this month, let us take a look at one of the tools the FCC does supply for those hoping to find a spot on the dial.

The LPFM Channel Finder is based on the current criteria in FCC 73.807, the LPFM spacing requirements under the current Rules. However, it has not been updated for the LCRA (Local Community Radio Act). At the very least, it will serve quite well as a litmus test as to what possibilities exist.

One way to get there is by going to the FCC‟s website and then drilling down to the LPFM Finder Page.

Alternatively, you can use the following link
and go right to the Finder Page. 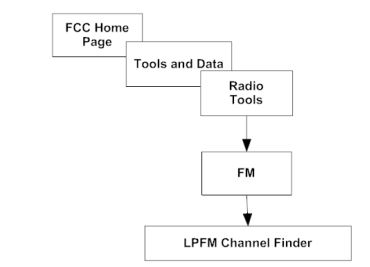 What the Channel Finder Will Do

Based on a given set of NAD-27 Coordinates, you will get:

What the Channel Finder Will Not Do:

As you use the Finder Page, there are some quirks which have been observed with this application.

I will start by using Punxsutawney in West-Central Pennsylvania as an example location, so you can see why you need to be careful in using the Finder. 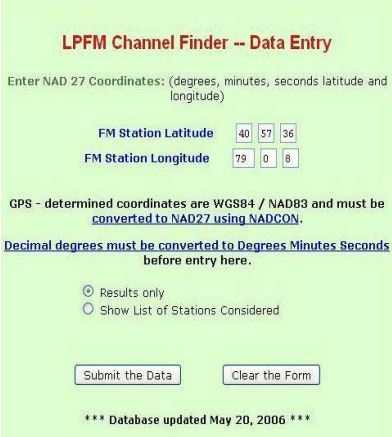 The search radius reaches more than a 200 km radius from the coordinates of interest. Thus there is a “ton” of information to pore through.

However, since it is free, it leaves little justification for complaints. And, it is an excellent way to crosscheck results obtained by other methods.

Our initial results were not too promising.

Not quite the desired solution

In order to score “hit” with this tool, your coordinates usually must be well clear of urban areas on all flanks. If you do not score a “hit,” then the probability of finding a post-LCRA compliant channel is about 25%.

Of course, under the current Rules if you are seeking opportunity in an urban setting it is 100% certain that the band is saturated and there is no more room. But with this simple and free tool, you have nothing to lose in trying it anyway.

If you cannot find a positive solution, it is time to contact someone capable of generating a full report for the coordinates. From that report, your consultant can determine if there are any areas where a short move would make it viable.

For example, a zone of opportunity for using 99.5 MHz in the Punxsutawney-Brookville area in western Pennsylvania is shown on the following map. In this example, an LPFM can be located above the BLUE line and between the RED lines. 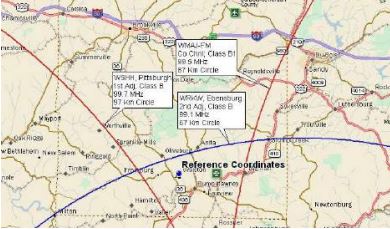 Slightly outside the desired city a site is possible

So, according to the map, just moving slightly more than 3 km into the zone of opportunity would have registered at least one hit with the tool.

Moving a bit further, by relocating the coordinates 26 km from Punxsutawney to Brookville, two „hits‟ were scored. 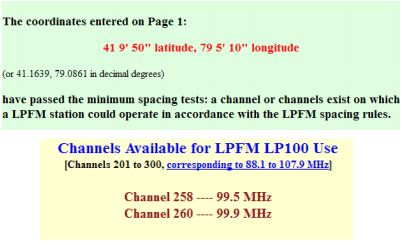 For each new location, you must run the tool again, using the new coordinates. Sometimes new frequencies will appear, while others may be disqualified and removed from the list. If you get a “hit” it is very likely that you will be able to file in the next FCC LPFM Window.

If the exact location of the station is not critical you can continue to move around a bit and might find an adjacent rural area that will give you access to the city or town of your interest.

The result table which follows on the next page summarizes several different searches made in different areas of the country.

The results show that it is indeed possible to find an opportunity in the rural areas as I have mentioned. 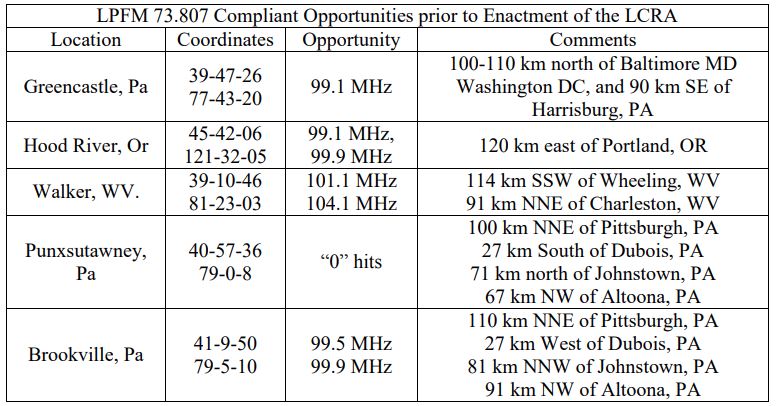